The death of Margaret Thatcher has given rise to cultic behaviour among her political opponents. In their need to outdo each other in the ferocity and piety of their denunciations of Thatcherism they have inadvertently attributed to the late Baroness supernatural powers that Satan himself would be jealous of. Since her death I have heard Thatcher blamed for, among other things, the financial crash of 2008 and the Iraq War – presumably she had control over George W Bush’s mind!? A Radio 2 caller even saw fit to blame Thatcher for the death of her son! No wonder they were singing Ding Dong the Witch is Dead!

Beyond the quasi-religious myth peddling of the anti-Thatcher cult, which seems to comprise largely of grinning teenagers bearing Socialist Workers Party placards and middle aged men swigging from cans of “Special” in public squares, there has been wide debate about the “legacy of Thatcherism”. 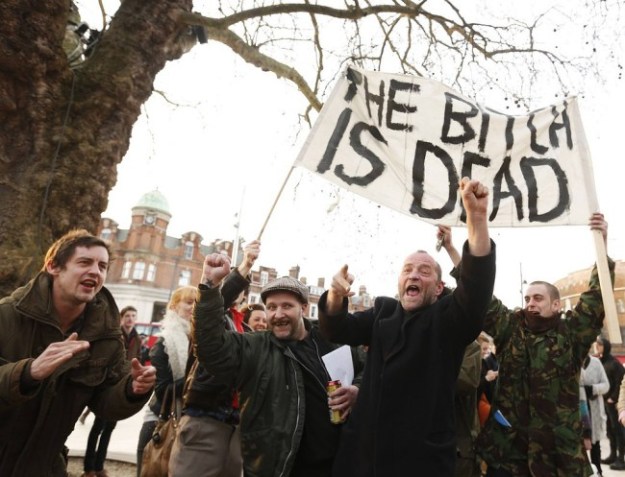 But what is Thatcherism anyway?

Among Margaret Thatcher’s greatest influences was Friedrich von Hayek, the author of The Road to Serfdom, a book which Thatcher believed should be compulsory reading. Hayek was concerned that the British left viewed Fascism as a Capitalist response to Socialism. A position which conveniently neglects the facts that the fascists were avowedly collectivist, just look at their symbols; despised free markets, and that Mussolini himself was once a member of the Italian Socialist Party.

Hayek’s philosophy is embodied in his observation that,

“Even the striving for equality by means of a directed economy can result only in an officially enforced inequality – an authoritarian determination of the status of each individual in the new hierarchical order.”

This is in direct opposition to the Marxist maxim: “From each according to his ability, to each according to his needs.” That credo is appealing; how often have you heard it said that Communism is a good idea “in theory”? However it rests on an obvious fallacy: that the “ability” and “need” of a person can be objectively defined. In the real world abilities and needs are completely subjective and continually changing. However, in a socialist society the appointed Nomenklatura becomes the arbiter of ability and need, so that the State giveth and the State taketh away. It has always been thus!

Like Hayek, Thatcher understood on a visceral level that capitalism and property rights underpin freedom in society, a view which she expounded upon in this 1977 interview with William Buckley.

The following year Hayek wrote a letter to the Times in which he said,

“If Mrs. Thatcher said that free choice is to be exercised more in the market place than in the ballot box, she has merely uttered the truism that the first is indispensable for individual freedom, while the second is not: free choice can at least exist under a dictatorship that can limit itself but not under the government of an unlimited democracy which cannot.”

Thatcherism, then, could be reduced to the observation that dictatorships require command of the economy – How could it be any other way? – And that prosperity cannot flourish without a great measure of economic freedom. Incidentally the only British Parties which would publicly deviate from that view today are the BNP, SWP (and maybe a few Greens). Which is why we should often remind ourselves that you can’t spell National Socialist German Workers’ Party without Socialist Workers Party!

David Cameron was right for once when he said “We’re all Thatcherites Now.”